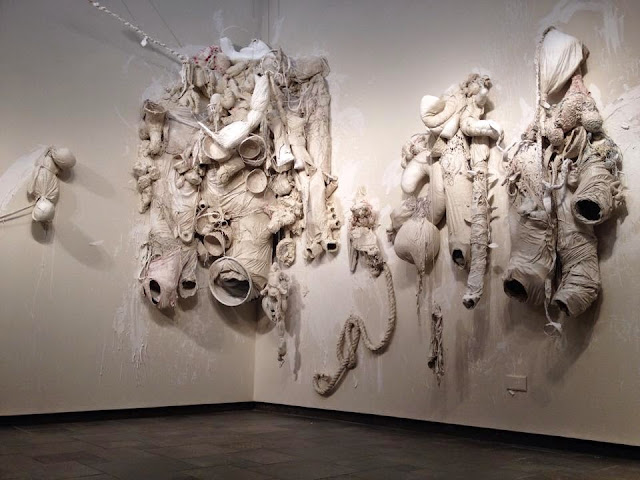 The installation by Daniel Bare and Valerie Zimany is composed of forms which are given volume by a skeleton of mesh chicken wire before being covered in slip coated items attached to the gallery walls via wire support. The materials are gathered from rejected donations to goodwill, items that were donated and then never resold that are destined to the landfill. Much of the meaning is derived from the discarded objects many of which have been in close contact to a person - bed sheets, bath mats, stuffed animals, lingerie, belts, shoes, pillows, blankets, lace, and crochet. Another layer of meaning is in the clay itself - clay is often used in landfills to coat items and provide a stabilizer aiding in the compression and decomposition of material. Any color that is viewed within the installation is "ghosting" from the item, as the kaolin based slip is an off-white. Kaolin clay is prized for its natural whiteness and is a major component of porcelain ware. Zimany and Bare do not fire the slip so it remains a clay rather than a ceramic. Having had the opportunity to assist in the instillation I was able to learn that the deflocculating of slip - the process of increasing slip fluidity or flow is reversible. To flocculate the slip Daniel Bare uses a mixture of diluted Epsom Salt which is made by combining the Epsom salt into boiling water until the solution is saturated - that is the salt crystals no longer evaporate. For a 5 gallon bucket approximately 4 ounces of flocculent are used to achieve a oatmeal consistency - 6 ounces will create a thicker cream cheese consistency. Both mixtures are used within this instillation.
I find that formally I appreciate the work very much and I greatly enjoyed being privy to its construction. Conceptually I felt that this work was somewhat weaker than the re-appropriation of material that Henrique Oliveira used for his installation last year. Valerie mentioned that the structure was based upon the idea of mud daubers and hornets nests which is an allusion to the moniker of Charlotte during the revolutionary war. An idea that is outdated and not representative of the current cultural state of affairs as budget cuts, tax hikes, and political debauchery have exposed the corrupt and backwards movements of a once progressive "new" south. 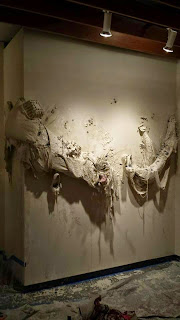 Both artists also present more traditional sculptural forms and methods as pedestal or wall pieces. Bare offers a selection of repurposed ceramic tableware (teacups, saucers, teapots, and coffee mugs) which are arranged and coated in a binding glaze before being reintroduced into a kiln which will activate the glaze and "melt" the items together. While this method has become part of the ceramic zeitgeist I find it shallow and technically lazy. Zimany is the strong suit of the pair her forms are self crafted, and her decals are self created. She also taps into the cultural fascination of the exotic particularly that of manga and hentai. By exposing the adolescent fascination with sexuality - she gives the female figures she depicts a modicum of power - though how the character will wield that power is purposefully ambiguous. Ceramic representations are immobile -- capturing a single moment in time - this has been part of their role in the commemorative market but it also belies their role in appetite, as the vehicle for that which we consume. 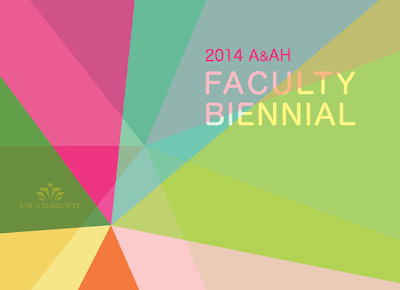 Having completed a residency with the McColl Center, I find it dubious that the photograph exhibited by Aspen Hochhalter is of fellow resident Natalie Abrams's wax sculptures. Abrams often hangs her work on the wall as one would expect with traditional painting or print work. Hochhalter reduces the items to black and white, which highlights the form but ultimately robs the viewer of rich detail. Appropriation is not new to art, but I cannot help but think of the photo of Dorothea Lange's photo Migrant Mother submitted by Andreas Gursky, which, as a separate avenue of dialogue, raises questions concerning the creative method as it applies to printing, process, and development. While each of these are certainly separate aspects of the photographers' toolbox, I am not sure that the technique justifies the work in and of itself. Originality of content must play a role. Additionally, I will note that the term "faculty" here is loosely defined since the building manager and gallery coordinator have also artwork displayed. Call me a purist, but I would limit participation to administration (in this case, either dean or department head) and instructors. When an institution defines something as art or, rather, to legitimizes it by including it in an exhibit, it opens the debate around who creates "art." In a culture that readily accepts Miley Cyrus and George W. Bush as artists, by loosening the requirements for participation, we undermine the importance of training, research, and credentials.
In cultures steeped in Christianity, Ecce Homicidium's narrative has been widely depicted throughout history, symbolic of the suffering that humans repeatedly inflict on one another. The crown, a motif for the prickly issue of gun rights, hovering over a semi-automatic pistol might symbolize the divine and legal right to weapon ownership. Proponents of gun control might interpret this as sarcastic ridicule from David Broduer.
It is interesting to note that the sculptural aspect of clay lends itself to a more personal application. Professor Williams's installation took inspiration from the process of becoming a United States citizen. Her fingerprint acts as a simulacra of the individual transformed into topographical maps and 3D landscapes. The recent loss of a loved one infuses the work of lecturer Keith Bryant. The finality of black-tinted concrete and the diminishing, house-shaped wooden polygon are reminiscent of rising flood water. Both materials are traditional elements of a building's foundation underscoring the home and its importance as a sanctuary from the elements. It also evokes the roles of householders in sustaining, financing, and maintaining the structure (usually within a selected group i.e. family or roommates.) The material speaks to constrained resources while simultaneously referencing the isolation and detachment of an individual within a group. Ceramic aprons allude to women's roles as child-bearers, homemakers, and allude to the fruit of the womb with luscious transfers of ripe cherries, emblematic of virginity. The timely topic of student rape on campus and the embattled reproductive rights of women is kindling for Shelley Sloan Ellis. The schizophrenic concept of what encompasses ceramic art is most visible in the design work of Thomas Schmidt and collaborator Jeff Stephen Miller whose fusion of recycled shards of porcelain are embedded within melted aluminum. The orchestration of materials is a matrix into which craft, art, and design are infused. Professor Susan Brenner channels the cacophony of incessant political and social media coverage into colorful abstract works that embody the tangible clutter and detritus of modern life. Technology and nature collide as Prof. Michael Simpson attempts to capture a single moment in time. This work explores the millisecond and the frame-by-frame aspect of animation as well as the speed with which the human brain can understand and process information. As a student of both the painting and ceramic departments, I was immensely interested in the offerings of the faculty within my disciplines. The ability to gauge the technical and conceptual mastery of individuals is helpful in selecting advisors and also either justifies or calls into question the principles participating instructors present within the studio setting. 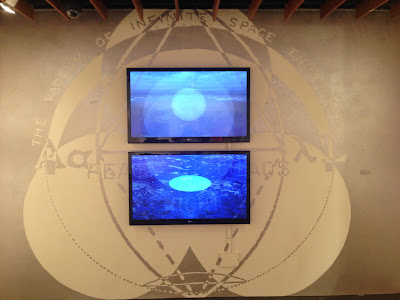 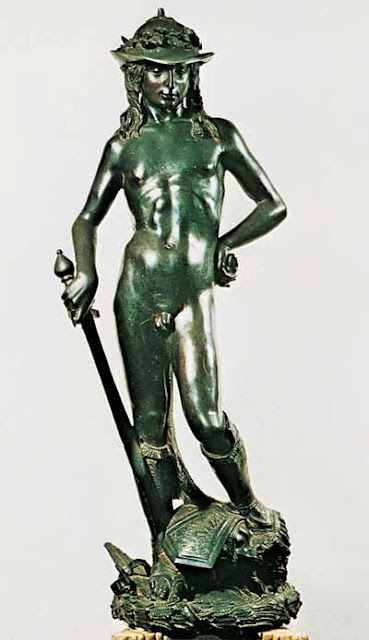 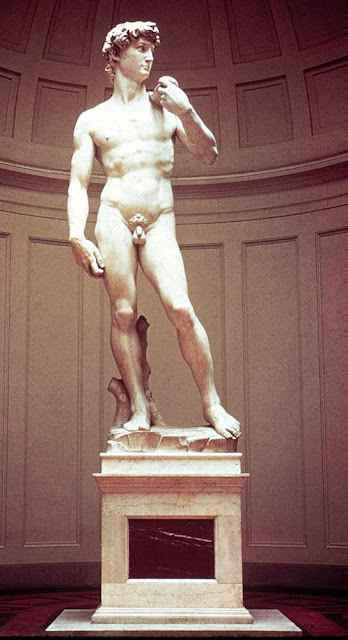